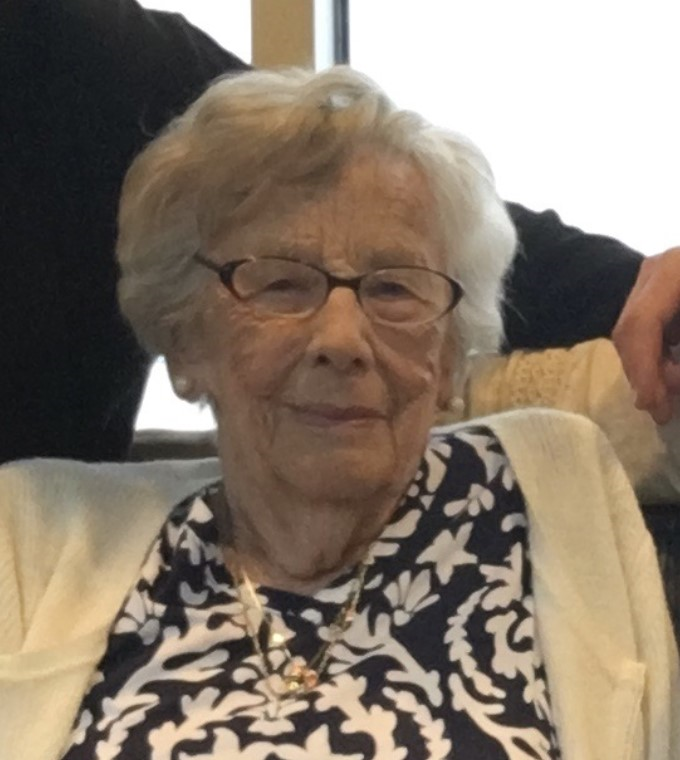 Reni was born in Karmoy Norway to Peder Olsen and Karen Valentinsen Olsen in 1919.  When she was 9 years old she came by boat to the United States with her parents.

They moved from Brooklyn to Atlantic City NJ, where Reni and Herb were neighbors. They would meet at the local skating rink and eventually became sweethearts. Herb always referred to Reni as “his little Norwegian girl”.  Herb and Reni married in 1941.

After the death of her mother, Reni’s sister Olga came to live with them.  Their first child, James (Jimmy) was born in 1941.  Carol followed in 1943.

Jimmy passed away soon after her birth.  During this time, with Herb serving in the army during WW II, they went to live with her father in Brooklyn NY.

In 1945 when Herb returned from the war the family was reunited and moved to Wilmington, Delaware.  They bought their first home in the city and later moved to Graylyn Crest, in North Wilmington.  Connie was born in 1952 and then Kevin was born in 1959.

Reni was a devoted wife, mother, and caring friend.  She was an amazing cook and sharing the food she loved to prepare was her way to care for friends and family.   Everyone loved sitting at Reni’s table.  She worked in the cafeteria at Bush School for a few years where the kids there also felt her love.

Reni and Herb moved in to Maris Grove in 2008 shortly after it was built.   She joined the blanket club and crocheted many Linus blankets. She enjoyed playing canasta with friends, and participated in painting classes. Reni lost her husband shortly after celebrating 70 years together (2011).

Shortly after celebrating her 100th birthday she moved to Rose Court.  When Evergreen Pointe was built she found her new home there.  Even at the age of 103 Reni lived an independent life style.

Recently she was asked by a friend “Are you from Norway?” Because of her hearing loss she had a very difficult time communicating but she heard this question, and her immediate reply was “I have Viking blood.”  And so she did. Gurine never forgot where she came from.  To our family she will always the little Norwegian Girl.

The funeral will take place on Thursday, Jan 26th at the Veterans Cemetery and is private.

The celebration of Reni Grubb’s life will be held on Friday, January 27th at 12:00 noon at Blue Sky in Maris Grove, Glen Mills, Pa.  A lunch will be served after the service.  At the gate at the entrance to Maris Grove, tell the guard you are attending the memorial for Reni Grubb.   Proceed straight, under the pedestrian overpass.  The Blue Sky building will be on your left.

Share Your Memory of
Gurine
Upload Your Memory View All Memories
Be the first to upload a memory!
Share A Memory