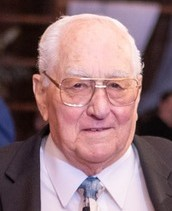 Obituary of Louis A. DeShullo

Louis A. DeShullo, age 89 of Millsboro, DE passed away on January 2, 2023 at Christiana Care. Born to Antonio & Giacinta DiSciullo in Boothwyn, PA, Lou was a longtime resident of Upper Chichester, PA. Lou served in Army during the Korean Conflict in El Paso, Texas. After the service, Lou was a carpenter, employed full time by Delaware County Supply in Boothwyn, PA for 42 years. Lou retired and relocated to Millsboro, DE with his wife, Carol and enjoyed his post retirement years working at Bob's Bike Shop and Atlantic Cycle Bike Shop. In addition to his employment at Delaware County Supply, Lou also, during those years, worked part time as a Police Officer for the Upper Chichester, Marcus Hook and the Lower Chichester Police Department's. As an active man in his community, Lou was a member of the Delaware County Fireman's Association, the American Legion Post 28 in Millsboro, DE, an honorary lifetime member of the Boothwyn Fire Co. where he served in many capacities including Fire Chief and Finance Secretary, former member of the Reliance Fire Co and served as a State Constable for 24 years. Lou was instrumental with the signing of the original Charter for the Chichester Crusaders. He was devoted to his faith and a member of Immaculate Conception of Lourdes Church in Marcus Hook, and Mary Mother of Peace in Millsboro, DE. He enjoyed time spent as a member of the Indian River Yacht Club. In addition to his parents, Lou is preceded in death by 1st wife, June V. Lane DeShullo who died in 1996, 2 children, Louanna Gray (2022) and Louis A. DeShullo Jr.(1964), 4 sisters, Mary DiCecco, Elvira Hargan, Dora Smyjewski and Jeannette Harris, 2 brothers, Nick and Albert DeShullo, and a granddaughter, Kristy Jo Kelleher. He is survived by his wife of 23 years, Carol Fulkersin DeShullo, 3 children, Debbie (John) Kardine, Joanne (Ed) Kelleher and Louis J.(Karen) DeShullo, 9 grandchildren & 6 great grandchildren. A visitation will be held on January 9, Monday from 8:30-9:45AM at the Pagano Funeral Home, 3711 Foulk Rd. Garnet Valley, PA. A Mass of Christian Burial will follow at 10:30AM at Immaculate Conception of Lourdes, 8th & Green St., Marcus Hook, PA. Interment Lawn Croft Cemetery, Linwood, PA.

Donations in his memory may be made to Juvenile Diabetes Research Foundation (https://www2.jdrf.org/goto/teamlucienne)

Online condolences may be made by visiting www.paganofuneralhome.com

Share Your Memory of
Louis
Upload Your Memory View All Memories
Be the first to upload a memory!
Share A Memory