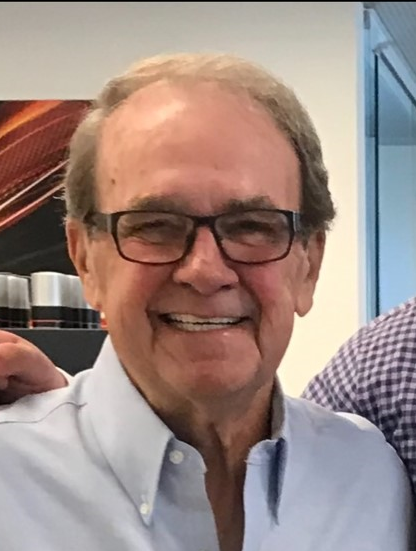 George F. Brown III, age 81, went to be with his wife in heaven, surrounded by his loving family and wonderful caregivers at home on Monday, December 26th , 2022.

Born to Ann and George F. Brown Jr. on February 13, 1941, George grew up in Chester, PA and attended Resurrection School and went on to St. James High School, Class of 1959. George began working at Scott Paper as a draftsman. He worked his way up and received training from the company to become an engineer. As an engineer, George traveled throughout the United States and Europe installing paper machines for Scott Paper. George retired in 1997 to enjoy his days with his wife and family. He became a starter and ranger at DuPont Country Club, where he met many retired friends and played golf.

George met Pat while they were in high school. They were together six years before marrying on May 5, 1962. They grew their beautiful family together and spent many date nights having dinners together or out with their friends. In their earlier years, they enjoyed traveling for work and for pleasure. Pat and George were amazing dancers, especially when on the dance floor together. George enjoyed spending most of his days at home with his wife, Pat and watching sports. George loved sports. In fact, George was quite the baseball player when he was younger, playing for the Chester Recreational Leagues as a shortstop and second baseman. George loved watching the Phillies and Eagles games and watching college football, rooting for Notre Dame, Penn State and Villanova. George was a very simple and quiet, yet social, man. He loved sitting down to have a one-on-one conversation with anyone who would chat with him. He was a very smart and financially savvy man who loved sharing his opinions and wisdom with everyone. George belonged to the Del Vets, Fraternal Order of the Eagles and the Moose Family Center, where he would go and mingle with friends and have a rum and coke, or two. Rum and cokes were George's favorite drink. You could find him on most nights at home pouring a rum and coke for him and his wife every day at 5:00pm on the dot, wearing his crisp Champion sweatsuit and slippers. George loved Corvettes, owning several in his lifetime. He kept his cars as nice and pristine as his wife kept their house. George enjoyed spending time with his family, whether it was driving his wife around to her favorite stores or visiting his daughter and great grandchildren on Fridays. George was a very smart, kind, hardworking and loving man who will be missed by many.

Relatives and friends are invited to attend the celebration of George's life and viewing at Pagano Funeral Home, 3711 Foulk Road, Garnet Valley, PA 19060 on Saturday December 31, 2022 from 9:15am to 10:00am, followed by the service at 10:00am. Burial will be private at St. Joseph on the Brandywine Cemetery, Greenville, DE.

The family asks that in lieu of flowers, donations may be made to Delaware Hospice. Memorial gifts can be made online, over the phone, or via check. Online condolences may be made by visiting www.paganofuneralhome.com.