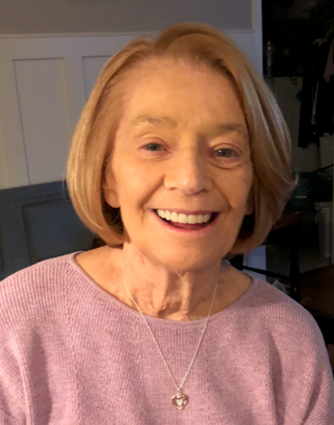 It is with the heaviest of hearts we share that Patricia "Pat" Ann McMullen has passed after almost a year battle with cancer though she fought valiantly, which holds true to her Irish-Catholic, South Philly roots!

Pat, once known as, "The meanest mother in Penn's Grant" (her families neighborhood growing up and essentially, the world to her children) and which she wildly embraced as a honorable title, has passed at her home surrounded by her three children on September 22, 2022. Pat was 77 years old.

She was the epitome of motherhood - tough on discipline though compassionate to the end and the truest definition of selfless. She was what every grandchild would want from a grandmother - funny, silly, invested, and just the sweetest grandma.

As a friend, her loyalty drew her to many and as an Aunt, Sister, & Relative, she always made you feel appreciated and loved. It pains to share this news but her pain has now ceased and she can guide all of her loved ones from Heaven, while being reunited with those she loved on Earth.

Born in Philadelphia to the late Harry Fadigan and Margaret (Schramm), Pat was raised in Philadelphia, PA or South Philly, as she would tell everyone. In her adult life, she resided predominately in Delaware/Chester counties for the past 46 years. Pat graduated from Maria Goretti Catholic High School, Philadelphia, Pa (Class of 1962).

Pat is the definition of resilience, as demonstrated from birth. The hospital sent her home with the expectation, she would pass shortly upon arriving. Clearly, she proved them wrong, and though she faced many challenges through life, she never gave up on her family or herself. She always stayed true to her slogan, "One day at a time!"

After years of working in numerous clerical roles, as well as, an aide to the girls at Divine Providence (Archdiocese of Philadelphia), an intermediate care facility for adults with intellectual disabilities, she took a chance and started her own business, "Dust Bunnies Beware" (yes, that was the actual name, as you can imagine, she did not have a large marketing budget!). She was able to become one of the busiest solo-home cleaners in Chester County. She was also a volunteer at Jennersville Hospital and Canine Partners for Life. Pat truly is one of a kind and will be missed greatly.

A visitation will be held at 10:00 AM Thursday, September 29, 2022 at Pagano Funeral Home, 3711 Foulk Road, Garnet Valley, PA followed by a memorial service at 11:00. Interment will remain private. Donations in her memory may be made to Canine Partners for Life.

Online condolences may be made by visiting www.paganofuneralhome.com

Share Your Memory of
Patricia
Upload Your Memory View All Memories
Be the first to upload a memory!
Share A Memory