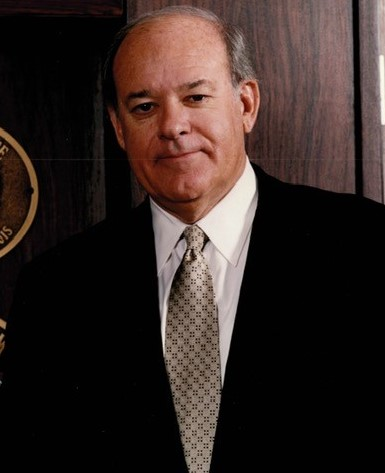 Vincent J. Trosino passed away peacefully at home with his family on January 19, 2022 following a two-year battle with lymphoma.

Vince was born on November 19, 1940 in Chester, PA, the son of Sylvester and Stella Trosino. He graduated from St. James High School where he played baseball and at age 17 met Patricia Gibney, the love of his life. He went on to graduate from Villanova University with a BA in Psychology. In 1962 he joined State Farm Insurance in Springfield, Pennsylvania as a management trainee and embarked on his very fulfilling career.

While working at State Farm's corporate headquarters he earned a master's degree in Psychology from Illinois State University. He moved through numerous leadership positions at State Farm and after a 44 year career retired as President, Vice Chairman and Chief Operating Officer. He also spent 14 years as a director with the Vulcan Materials Company of Birmingham, Alabama.

Vince served on numerous professional and educational boards nationally and locally. He was appointed by Illinois Governor Edgar to two terms on the Judicial Inquiry Board. He served as Chairman of the Board for the American Institute for CPCU, the Insurance Institute of America, and the Insurance Institute for Applied Ethics. He was also an Honorary Trustee of the Brookings Institution. He was awarded the Joseph Cardinal Bernardin Humanitarian of the Year Award in 2001, the Distinguished Alumnus Medallion by the College of Liberal Arts and Sciences of Villanova University in 2000 and was inducted into the Illinois State University College of Arts and Sciences Hall of Fame in 2006.

Ethics in both business and life were very important to Vince. In support of this value, he and his wife established the Patricia and Vincent J. Trosino Fellowship in Augustine and Culture Seminar Program at Villanova University. It was Vince's belief that ethics should be a part of the curriculum for all students, and particularly those in business school.

Vince's recreational passion was fishing and he enjoyed many trips to beautiful locations with his family and good friends. Some of his happiest memories were of days standing in a beautiful stream, casting for rainbow and brown trout, followed by stories and laughter around the campfire.

Visitation will be held from 4:00 to 7:00 pm on Friday, February 4th at Carmody-Flynn Funeral Home, 1800 Eastland Drive, Bloomington, IL. A funeral Mass will be held at 10:00 a.m. on Saturday, February 5th at St. Patrick Church of Merna, Bloomington. The Mass will be livestreamed and can be seen at ttps://www.facebook.com/stpatrickmerna or www.carmodyflynn.com. Interment will be private. If you wish to honor his memory, memorials can be made to St. Vincent de Paul, Holy Trinity Conference in Bloomington, IL or the St. Jude's Children's Research Hospital of Memphis, TN. Online condolences may be made by visiting www.paganofuneralhome.com.

Share Your Memory of
Vincent
Upload Your Memory View All Memories
Be the first to upload a memory!
Share A Memory