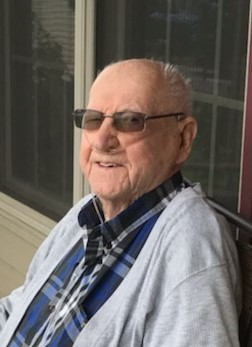 Frank L. Gahres, age 98, of Aston, PA passed away on November 3, 2021 at his granddaughter's home. Born to Harry and Frona (Long) Gahres in Pitman, PA, Frank previously resided in Ogden, PA before moving to Aston, PA in 1955.

Frank served his country in the Army during World War II. After moving to Ogden he worked for Ford Motor Company in Chester. He then worked as a tankerman for General Chemical for over 30 years, before retiring in the early 1980's. After retirement Frank and Sue enjoyed traveling and family gatherings for holidays, birthdays, graduations, and other events. Playing games and big family meals was always a highlight. Frank was a member of the Aston Lions Club and a longtime member of Mt. Hope United Methodist Church in Aston. He enjoyed gardening and spending time with his family, especially his 11 grandchildren. In addition to his parents, he is preceded in death by his loving wife of 63 years, Susie R.(Hinkel) Gahres, and eight siblings.

A memorial service will be held on Saturday, December 4, 2021 at 11 a.m. at Mt. Hope United Methodist Church, 4020 Concord Rd, Aston, PA 19014. In lieu of flowers please donate to the charity of your choice. For messages of condolence, kindly visit www.paganofuneralhome.com.