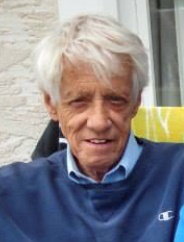 "Anything worth doing is worth doing right!" That's a quote, John Brientnall, Jr. age 78, of Glen Mills, PA, would pound into his children's heads growing up. But sadly, his days of loving and caring for his children along with grandchildren has come, as he passed on July 16, 2021 at his home.

Born in Philadelphia to the late John Brientnall, Sr and Vera Kefford Brientnall, John was raised in Folsom, PA and a genuine pain in the ass to everyone he loved!

Merry Christmas was a particular saying that anyone calling John would hear often and feels right including it into his obituary.

Interestingly, John was a direct descendant of David Brientnall, of the Quaker Colony that settled in Philadelphia in 1682, and whose marriage is recorded in the Arch Street Meeting House in Philadelphia as being the third on record of that colony.

He resided in Glen Mills for the past 45 years, previously residing in Morton, PA. John graduated from Ridley High School class of 1961 and received his Bachelor's degree from Pennsylvania Military College in 1965, and earned his MBA from Penn Morton College (later renamed Widener University) in 1972. John was a proud veteran of the U.S. Marine Corps and an accountant that had worked at United Tire & Service of Concordville (formerly Concord Auto) for the last 25 years, as well as, Concord Village Garage. He loved Philadelphia sports (which is probably why he had heart issues) music, television, reading and "Brientnall genealogy" (see above).

Additionally, he loved to take a quick ride down to the "shore" (Avalon, NJ) sporting his cut-off "dungarees" and white tank top.

There is no question that his biggest loves were his cigarettes, Wawa, Pepsi & Tastykakes, as well as, his children and grandchildren. His loyalty to his children was unwavering and his proudest accomplishment.

He coached and supported numerous youth activities and could always be spotted on the sideline or hockey rink of his children.

As mentioned, he is survived by his three children; Susan (aka, Monkey) [Bert] Pandak, John Michael (aka Tubby) [Adrien] Brientnall and Thomas (aka Tonka Truck Tom) [Kelly] Brientnall; eight grandchildren, Riley, Joshua, Collin, Thomas, Cooper, Caden, Reese and Teagan; his three siblings, Gilbert (Mary) Brientnall, Christine (Gary) Lee and Bryan Jeffries (Susan) and numerous cousins, nieces and nephews. A visitation will be held on Tuesday, August 3, 2021, 2:00-3:00PM at Pagano Funeral Home, 3711 Foulk Road, Garnet Valley, PA followed by a memorial service at 3PM. Interment will remain private. Donations in his memory may be made to https://semperfifund.org.

Online condolences may be made by visiting www.paganofuneralhome.com.