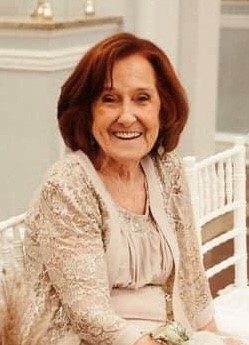 Irene Shirley Kozisky, age 85 of Garnet Valley, PA passed away peacefully on March 23, 2021 at her daughter Sharon Patrone's home surrounded by her loving family. Born to Edward and Irene Allmond Myers  in Philadelphia, PA, she was a longtime resident of Garnet Valley, PA, previously residing in Philadelphia.  A secretary, Shirley worked for many years at Metropolitan Hospital retiring in the late 1990's. Devoted to her Catholic faith, she was a member of St. Cornelius Catholic Church in Chadds Ford, PA. She also was a proud member of the Red Hat Society.  In her early years, she was an avid bowler where she belonged to numerous leagues. Shirley enjoyed caring for her home where she enjoyed cooking and raising her family. She was a devoted mother, grandmother and great grandmother, and cherished time spent with her family and friends. Shirley was a descendant of Pocahontas and was proud of her American Indian Heritage. In addition to her parents, Shirley is preceded in death by her son, Michael R. Kozisky, 2 sons in law, Alfred Patrone Jr. and Brinton Michael Jackson and being the youngest of 5 children, she was preceded by 4 brothers, Arthur, Bobby, Billy and Edward Myers.  Shirley is survived by 2 daughters, Deborah Jackson and Sharon Patrone, daughter in law, Tricia Kozisky, granddaughters whom she raised like daughters, Breana (Kevin) Spires, Gia (Michael) Kemske and Tara (Jim Feeley) Patrone, as well as Matthew, Michaela Kozisky and Michael Kozisky Jr. along with several other grandchildren. She is also survived by her beautiful great grandchildren whom she cherished, Cash and Orlando Spires and numerous other great grandchildren. A visitation will be held on Saturday, 9-10:30AM at St. Cornelius Catholic Church, 160 Ridge Road, Chadds Ford, PA, followed by a Funeral Mass at 10:30AM.  Interment will remain private.  Donations in her memory may be made to Friends for Friends, in memory of Alfred Patrone Jr., her son-in-law who passed in 1996 after a battle with cancer, 105 Cardinal Drive, Conshohocken, PA 19428 or to the Go Fund Me for Frank "John" Laganosky (https://www.gofundme.com/f/supporting-kate).  Online condolences may be made by visiting www.paganofuneralhome.com

Share Your Memory of
Shirley
Upload Your Memory View All Memories
Be the first to upload a memory!