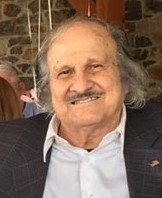 Dominic W. Silla, Jr., age 84, of Swarthmore PA passed away on September 27, 2020 at Penn Hospice of Chester County.  Born and raised in Philadelphia, he was a son of the late Jenny Pizzo and Dominic W. Silla, Sr.  He served in the Army and later was a self employed electrician. Dominic loved being with his family and having family dinners together. He liked carpentry and cars. He was a master tradesman. He enjoyed being with his family, laughing, eating and hearing his grandkids play. In addition, he enjoyed crabbing, smoking cigars, and listening to Andre Bucchelli and Frank Sinatra. Dominic is survived by his wife, Anna Maria DiQuattro; his daughter, Michelle (Tim) Martin; his son, Dominic Silla III; his three grandchildren, Arrianna, Brendon, and Vinny Martin; his two brothers, Carmen and Jon Silla; his two sisters, Lena Ciurlino and Anna Marie Smith.  A visitation will be held on Sunday, October 4, 2020, 6-8PM at the Pagano Funeral Home, 3711 Foulk Rd., Garnet Valley, PA and again on Monday, October 5, 2020, 9-10AM at Pagano Funeral Home. A Funeral Mass will be held Monday, 11AM at Notre Dame de Lourdes Church, 950 Michigan Ave., Swarthmore, PA. Interment will follow at S.S. Peter and Paul Cemetery, Springfield, PA. Luncheon to follow and all are welcomed. Online condolences may be made by visiting (www.paganofuneralhome.com).

Share Your Memory of
Dominic
Upload Your Memory View All Memories
Be the first to upload a memory!