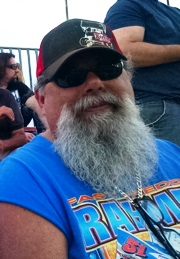 On Wednesday, February 26, 2020 Harry Hartman King III passed away peacefully at his home while surrounded by his devoted family after a long and hard-fought battle with cancer. He is survived by his loving wife Cynthia, son Harry IV, daughter Kristin, brothers Wilson and Robert, sister Laura Brophy, mother-in law Mary Marines, and many nieces and nephews.

Harry was fondly known by his family and friends as, Big Harry. He grew up in the Chadds Ford area and took pride in being a lifelong resident of his community. Big Harry loved working with his hands. By trade, he was a mechanic gifted with knowledge and skills that enabled him to fix or build just about anything. On the weekends, Big Harry enjoyed riding his motorcycle with his son, letting his hair and beard freely float in the wind. When he was not riding his motorcycle, he could be found drifting in his swimming pool. Summers will not be the same without Big Harry.

Big Harry was a devout and loving father. He was extremely proud of and close with both of his children. In addition to being a loving father, he was a devout and loving husband. Big Harry cherished his wife Cynthia and often would be seen holding her hand. It was obvious to all that knew Big Harry that he loved his wife more than anything in the world. Although parents often tell their children they do not have a favorite, it was no secret that his daughter Kristin was his favorite. Big Harry enjoyed bantering with Kristin about current events and politics, watching television shows with her, and riding around in his Ford Mustang. Big Harry will be dearly missed by his family.

Big Harry enjoyed racing, riding and working on Harley Davidson motorcycles, reading, cooking, and playing with his dogs. Big Harry was a family man and a best friend to many. Those that had the pleasure of knowing him might say he was a gentle giant. He was blessed with a presence and had the type of personality that would capture the attention of everyone in a room. Big Harry had a knack for storytelling. This is one of the things about him that will truly be missed. He was smart, well read, and an overall deep person with an affection for the things in life that truly mean something. He had a passion for living and loving his family and friends. Big Harry will truly be missed by many.

A memorial service to celebrate the life of Harry Hartman King III will be held on Friday, March 6, 2020 at 9:30 a.m. to 11:00 a.m. located at Pagano Funeral Home, 3711 Foulk Road, Garnet Valley, PA 19060. In addition to a prayer service, time will be set aside to provide family and friends with the opportunity to share memories of the man fondly known to all as, Big Harry. It would be greatly appreciated if you would come spend time with us to share in our love for Big Harry. While flowers are appreciated, we are remembering Big Harry by making contributions to the Brandywine Valley SPCA in his name. As many know, Big Harry always had a special place in his heart for his dogs.

Share Your Memory of
Harry
Upload Your Memory View All Memories
Be the first to upload a memory!