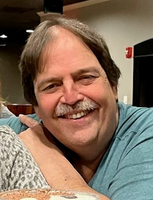 Christopher J. Wesolowski, age 60 of Garnet Valley, PA passed away suddenly on May 8, 2022 at home. Born in Chester, PA to Edward & Gladys Wesolowski, Chris has resided in Garnet Valley for most of his life before recently moving to Wilmington, DE. Chris was a Sales Manager at the family business, E&S Auto Parts in Aston, PA. He graduated from Garnet Valley High School, class of 1979, and prior he attended St. James High School. Devoted to his family, Chris enjoyed vacationing and summers at the Wildwood Beach. He was known for his sense of humor and his quick wit. Chris will be sadly missed by family and friends. In addition to his parents, he is preceded in death by a brother, Edward "Stretch" Wesolowski who died in 2009. Chris is survived by his wife of 23 years, Denim Burk Wesolowski, 3 children, Nicole (Paul) Shay, William Wesolowski & Gabrielle Wesolowski, 7 siblings, Michael Wesolowski, Linda (Geoffrey) Ringle, Robert (Lin) Wesolowski, Mary (Larry) Piper, Twin brothers, Daniel Wesolowski & David (Mary) Wesolowski and Walter Wesolowski as well as a host of nieces, nephews & cousins. A visitation will be held on May 12, Thursday, 8:30AM-10:30AM at the Pagano Funeral Home, 3711 Foulk Rd. Garnet Valley, PA followed by a Funeral Liturgy at 10:30AM. Interment, Immaculate Heart of Mary Cemetery, Linwood, PA. Donations in his memory may be made to Michael J. Fox Foundation for Parkinson's Research (www.michaeljfox.org). Online condolences may be made by visiting www.paganofuneralhome.com