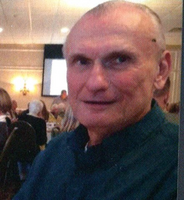 Robert J. Wertz, age 74 of Marcus Hook, PA passed away peacefully on January 24, 2022 at his home. Born in Chester, PA, he was a lifelong resident of Marcus Hook. Robert worked at Walmart for the past 15 years. He was an avid hunter and enjoyed going to the gun range and playing billiards. Robert served in the U.S. Army during the Vietnam era. In addition to his parents, Charles E. and Margaret Dorothy Moncrief Wertz, Robert is preceded in death by two brothers, Charles E. Wertz Jr. and John C. Wertz. He is survived by a brother, Richard J. Wertz and two sisters, Ann Schell and Fran Mclean, as well as a host of nieces and nephews. Funeral services and interment will be held privately. Online condolences may be made by visiting www.paganofuneralhome.com.