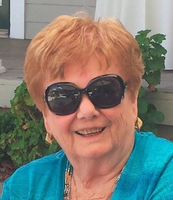 Loretta Marie Scancella, age 84, of Glen Mills, PA passed away on Saturday, October 17,2020 at Maris Grove - Rose Court. Born in Worcester, Mass., Loretta had resided for the past four years at the Maris Grove Community in Glen Mills, PA, previously residing in Millsboro, DE. She was the daughter of Raymond and Loretta Cronin Beringer. Loretta was a travel agent for 20 years. She was a member of the St. Cornelius Parish in Chadds Ford, PA. Loretta enjoyed cooking and collecting new recipes. In her spare time, she also enjoyed playing Bridge and was known as an avid traveler. In addition to her parents, she is preceded in death by her daughter, Karen Jackson. Loretta is survived by her husband of 62 years, Anthony "Tony" V. Scancella; her five children, Susan (John) Morgan, Diane (Matthew) Spicer, Debra (James) Liney, James Scancella and Lisa (Thomas) Shea; a sister, Rae Adams, nine grandchildren and two great grandchildren. Funeral services and interment will remain private. Donations in her memory may be made to St. Jude Children's Hospital (www.stjude.org). Online condolences may be made by visiting (www.paganofuneralhome.com).