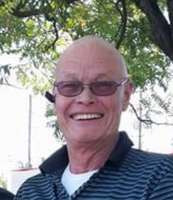 Harry F. "Bud" Buschmeier III, age 72, of Lester, PA passed away quietly at his home on Monday, July 27,2020. Born and raised in Darby, he was the son of the late Harry F. Jr. and Adeline Voss Buschmeier. Bud was a 1966 graduate of Darby Colwyn High School and a Vietnam veteran of the U.S. Air Force. Prior to retiring in 2013, he was an electronic design engineer for 40 years at the Moog Components Group, Springfield, PA. He also was a DJ earlier with FM 92.1 and later assistant station manager at Memory Lane Oldies Internet Radio. Bud enjoyed building model railroad and model cars. He was an avid aviation enthusiast and in his early years, was trained as a single engine plane pilot. Bud enjoyed spending his summers at his lake house on Lake Garrison in NJ. He was preceded in death by his baby daughter, Laurieann Buschmeier and his daughter-in-law, Lisa Buschmeier, who passed in 2019. Bud is survived by his wife of 53 years, Barbara J. Radzewicz Buschmeier; his three children, Sonya Nicholson, Chris Buschmeier, Jonathan (Tina) Buschmeier; eight grandchildren, Michael Cristinzio, Kaitlyn Dallal, Nicole Yerkes, Joshua and Kylie Nicholson, Sara, Juliana, and Alexandria Buschmeier,and two great grandchildren, Levi Janvier and Maggie Cristinzio. Services will be private. Donations in his memory may be made to the American Cancer Society (www.cancer.org). Online condolences may be made by visiting (www.paganofuneralhome.com).