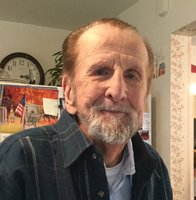 Paul Vincent Friel, age 91 of Brookhaven, PA passed away on February 7, 2020 at his residence. Born to James and Pearl Feeley Friel in Ridley Township, PA, he resided the past 55 years in Brookhaven, PA. He graduated from Eddystone High School and served his country with the Army during the Korean Conflict in the 11th Airborne Division. Paul worked as a clerk for the State of Pennsylvania with the LCB, retiring in 1997. In addition to his parents, he is preceded in death by a son, Paul V. Friel, Jr. who passed in 2008, and by his 8 siblings. Paul is survived by his loving wife of 60 years, F. Irene Lincoln Friel, 5 children; Patrick (Barbara) Friel, Elizabeth (Jeff) George, Daniel Friel, Maureen (Glenn) DeHaven, and Eileen (Jim) McGarvey, 16 grandchildren, and 10 great grandchildren. Services and interment were held privately.