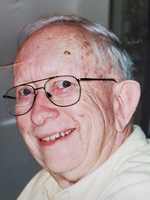 Harold Preston Creel, Jr., age 89, of Glen Mills, PA, passed away on February 2, 2020 at his residence at Maris Grove. Born prematurely to Harold Preston and Nelle Alexander Creel in Tulsa, OK, Preston spent time in a shoebox his father converted to an incubator. Doctors did not expect him to survive, but survive he did, even going on to graduate early from high school. Before relocating to Glen Mills 10 years ago, Preston lived in Woodbury Heights, NJ and West Deptford, NJ. He worked for Texaco for almost 30 years in various engineering positions. In the mid-1980s, Texaco purchased Getty Oil and the Westville, NJ refinery was sold to Coastal Oil, from which Preston retired as chief power engineer. Preston attended Auburn University and graduated from the University of Wyoming where he was a brother of the Sigma Tau engineering fraternity, now Tau Beta Pi, a member of the Young Adult Methodist Club, and a competitive table tennis player. He met the love of his life, Margaret Ellen "Marge" Conger, when they both worked for Texaco in Casper, WY. Preston and Marge moved to Woodbury in 1957. Devoted to his faith, Preston was a member of the Kemble Memorial UMC in Woodbury, NJ and cherished his time in the choir and on the financial board. As a member of the Woodbury Jaycees, Preston lit the fireworks at the annual Woodbury July 4th celebrations for many years. He was active in the Woodbury Heights Senior Citizens Club, secretary of the Woodbury Bowling Club, president of the Woodbury Heights Elementary School Board, and coach of the Woodbury Heights Boys & Girls Club baseball and softball teams. He was also part of numerous bridge groups and gourmet dinner groups. Marge and Preston enjoyed ballroom dancing, and Preston enjoyed playing golf and tennis. In addition to his parents, Preston is preceded in death by his wife, Margaret Creel, to whom he was "married 63 years, 3 months, and 13 days," and a sister, Carolyn Soderberg. He is survived by his children, Saralynne (Dr. Bradley) Bute, Jim (Janet) Creel, Hal (Sarah) Creel, and Diana (Greg) Allen; a sister, Alexandra "Sandy" Creel Bakarich; 10 grandchildren, Colleen, Megan, Kathleen, Jenna, Chase, Laura, Matthew, Jillian, Sean, and Brady; six great-grandchildren, Madeleine, Elizabeth, Caroline, Savannah, Ford, and Adeline; and three nieces. A visitation will be held at Davis & Wagner Funeral Home, 171 Delaware St., Woodbury, NJ on Saturday, February 8, 2020, from 10 a.m.-12 p.m. A Funeral Service will begin at 12 p.m. at the Davis & Wagner Funeral Home, 171 Delaware St., Woodbury, NJ. Interment will follow at Wenonah Cemetery, Wenonah, NJ. Arr: Pagano Funeral Home. Online condolences may be made by visiting www.paganofuneralhome.com.